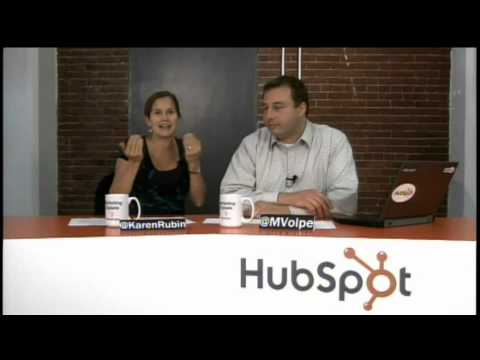 Episode #217 – September 14, 2012
Intro
How to interact on Twtter: Include #MktgUp in your tweet!
On the show today is Karen Rubin (@karenrubin) and Mike Volpe (@mvolpe)
As always, all the old episodes are in iTunes. If you like the show, please leave a 5-star review!
Anyone is welcome to come by the show to watch as part of the live studio audience – 4pm Friday
Headlines

Showrooming is when a shopper uses a brick and mortar store to touch and try a product only to buy it online.
84% of ?showrooming shoppers? have conducted research while shopping in-store.
33% of consumers have admitted to comparison shopping on a competitor?s website while in another retailer?s store.
6% were likely to abandon an in-store purchase for a competitor.
Jack Philbin, co-founder, CEO and president of Vibes couldn?t have put it better when he said,

?The retailers who don?t deploy a mobile marketing strategy will continue to be challenged with decreasing in-store sales and risk being Amazoned.?

http://www.getthefive.com/articles/the-idealist/real-time-in-the-real-world/
Recent research by Google into the ways in which people use their multiple devices to conduct searches offers some interesting insights.
The New Multi-screen World: Understanding Cross-Platform Consumer Behavior,?Google says that 90 percent of people move between devices to accomplish a goal, whether that?s on smartphones, PCs, tablets or TV.
But when people are out and about, smartphones searches are all about the spur of the moment. According to Google: “We found that people often turn to nearby devices to complete spur-of-the-moment activity. In fact, 80% of the searches that happen on smartphones are spur-of-the-moment, and 44% of these spontaneous searches are goal-oriented.”
A young colleague did a quick check to see where a recently recommended restaurant was located, which he found, and then saw there was a coupon offer, which he noted, and then he clicked on the click-to-call link to see if there was a table. There was. We enjoyed our lunch and when it was time to pay, he whipped his iPhone out, pulled the coupon, the waiter punched something in (I couldnapos;t see what) — and voila! Our lunch was half price.
The Wall Street Journal recently noted that folks are able to do comparison shopping from the showroom floor and make decisions instantly about whether to buy now or wait and get a better deal. The trend is called ?showrooming,? and they estimate 39 percent of walkouts are influenced by smartphone usage.
Marketing Takeaway: Figure out how to leverage mobile devices to enhance your customers experiences.
Facebook Exchange Makes itapos;s Beta Debut
http://blog.hubspot.com/blog/tabid/6307/bid/33588/Facebook-Launches-New-Ad-Retargeting-Tool-Following-Impressive-Beta-Results.aspx
Facebook Exchange (FBX) is a cookie-based ad targeting system that serves up ads related to a userapos;s web browsing activity, in real time on Facebook.
Facebook Exchange allows marketers to leverage consumer insight data to remarket to the same audience on Facebook at the right time
AllFacebook and TechCrunch shared some results from several DSPs that were involved in the Facebook Exchange beta program.
As a whole, the data seems to indicate that FBX ads may be less expensive and generate higher clickthrough rates.
Furthermore, they seem to generate higher post-click conversion rates compare to retargeted ads on other exchanges — even Google?s AdX.
AdRoll reported an ROI of 16X for its clients using FBX ads.
TellApartapos;s clients generated an average clickthrough rate of 6.65% with FBX ads vs. 6.41% on Googleapos;s AdX.
Triggit indicated that its clientsapos; FBX adsapos; post-click conversion rates were 2.2X higher, their cost-per-click was 5.6X lower, and they generated 4X more profit than ads via traditional ad exchanges.
FBX Product Marketing Manager Scott Shapiro says they arenapos;t for everyone: “Facebook Exchange is perfect when