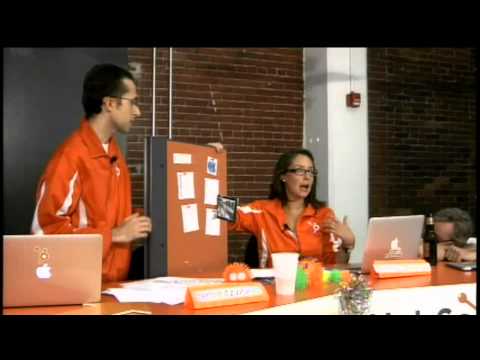 This week on the Marketing Update, Amanda Iglesias and Michael Mintz discuss the Jimmy Kimmel and Tracy Morgan stunt, whether or not a picture is worth more than 140 characters, the launch of iOS6, and how 50% of consumers value a brand?s Facebook page more than it?s website.

So, we?re back… and no one?s more shocked than we are! Let?s see if we can limit the damage on set during today?s episode…
All the old episodes are on iTunes. If you like the show, please leave a 5-star review!
Anyone is welcome to come by and watch the show as part of the live studio audience. Every Friday at 4PM in Cambridge, MA!
Headlines

Sunday night at the Emmy?s – Jimmy Kimmel, no stranger to incorporating Social Media into his late night talk show
Asked the audience to get on twitter and tweet ?OMG Tracy Morgan just passed out on stage at the Emmys. Turn ABC on now.?
Results?
Nearly 74K tweets in 3 minutes (20,000ish tweets a minute) ? helped by fellow comics like Stephen Colbert and Joel McHale who have massive followings
The whole event generated an estimated 1 million tweets
13.2 million viewers, a jump of 6% over the previous year
Takeaways:

Don?t be afraid to take chances! Find creative ways to engage with your audience in different channels to drive more interest
Give folks a clear call to action
Leverage your best followers and biggest fans
Be awesome like Jimmy Kimmel

Video launched one week ago ? made it in 2 days
Over 100K Visits ? 3K visits away from beating out our top-performing video
Fastest “viewer velocity” – beat You Oughta Know (which got 40K in one week) – this got 80K in one week.
Takeaway?

CHECK IT OUT IT?S HILARIOUS: http://www.youtube.com/watch?v=2aa8os53_Aclist=UUVeuau7DLrg7zlAjxxDbdwwindex=0feature=plcp

Is a picture worth more than 140 characters?

Instagram just passed Twitter in daily active users on mobile this past August: Instagram ? 7.3 million daily users vs. Twitter ? 6.9 million daily users
Instagram users also spend more time on Instagram 257 minutes vs. Twitter 170 minutes
AND all this despite the fact that Twitter had 29 million unique US smartphone-based users while Instagram had under 22 million
This sort of makes sense:
Instagram – Highly visual flow of content (all photos) ? cause someone to pause and take it in
Twitter ? designed to make it easier for users to flow through their stream more quickly
#Rant
Twitter has a fully functional website that was not included in the math vs. Instagram is ONLY a mobile app ? their website is just a glorified Landing Page pushing you to download it on iTunes
If you want to do anything on Instagram, you have to use your phone so it FORCES you to use the mobile all
Instagram is currently choosing to funnel all activity through mobile. It?s suboptimal. IMAGINE if you could also use Intsagram mobile.
All the articles that talk about this are tying it back to monetization opportunities on mobile ? users aren?t stupid. We realize you?re trying to wring the last dollar out of mobile.
Takeaways:

Don?t limit the different ways people can access your content ? different people want to use different channels at different times for different tasks.
Don?t take quotes like this at face value. Context is everything ? ?Insta (and by extension) FB isn?t better than Twitter.? It sounds like a PR spin and is looking more and more like it?s part of a bigger story that has only just begun…
Maps on Apps on Apps