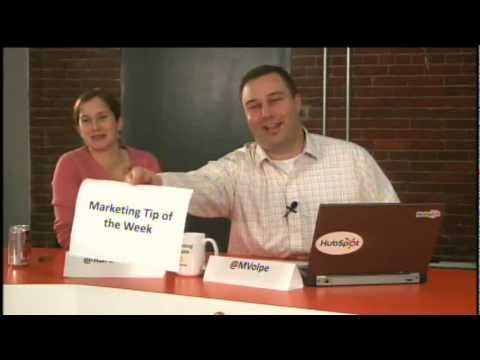 How to interact on Twtter: Include #HubSpotTV in your tweet!
On the show today is Mike Volpe (@mvolpe) and Karen Rubin (@KarenRubin)
As always, all the old episodes are in iTunes. If you like the show, please leave a 5-star review!
Anyone is welcome to come by the show to watch as part of the live studio audience – 4pm Friday
Catvertising

http://www.youtube.com/watch?feature=player_embeddedv=IkOQw96cfyE#!
http://daveibsen.typepad.com/5_blogs_before_lunch/2011/11/catvertising-it-is-persuasive-unignorable-relevant-and-rememberable-purr.html
To stay on top of the ever-changing advertising landscape, john st. has opened the world’s first cat video division. With production, filming and seeding all in-house. Ask yourself, what can cat videos do for your business?
http://fuelthefuture.adweek.com/video/john-st-catvertising-panders-to-fuel/14162/
In it, the agency abandons the traditional agency model–and even the cutting-edge digital agency model–and instead chooses to focus strictly on producing?cat videos. Yes, in 2012 John St. is launching the world?s first and only ?catvertising? agency.
more than 600,000 views
Headlines

http://www.businessinsider.com/bank-of-america-google-plus-page-2011-11
It’s been just a week since Google Plus started allowing for companies to have pages on the social networking site and it looks like someone already beat Bank of America to the punch, according to Carl Franzen at Talking Points Memo.
BofA’s Google Plus profile bashes the already embattled Charlotte, North Carolina-based bank. The page, which is no longer available, features unflattering pictures of former CEO Ken Lewis and mocking wall posts.
Wall posts such as
“Living under a tarp? I am too. My TARP is much bigger, however, and billions of dollars more expensive.”
Big company party in foreclosed house #240330047 tonight
http://mashable.com/2011/11/18/google-plus-bank-of-america/
Page has come down, but not before getting 1100 followers and 700 +1’s
Twitter like verified account badge
Google+ also has HTML verification to tie your site and Google+ page together
Marketing Takeaway: Protect your brand, sign up for your Google+ page
The Real Impact of Google SSL Change

http://blog.hubspot.com/blog/tabid/6307/bid/28729/Google-s-SSL-Change-Actually-Impacts-11-of-Search-Traffic-New-Data.aspx** In the last week of October, Google announced and rolled out a major change to the way its search engine interacts with the rest of the web. Google now uses an SSL-encrypted experience for anyone who uses the Google.com homepage while logged in as a Google user.
According to Google, this change was supposed to represent a single-digit percentage of traffic to most website owners. (Google estimated that the change would impact less than 10% of searches conducted on a daily basis.)
Across all sites, 11.36% of organic search traffic has arrived without a keyword set during this time period for the average HubSpot customer. However, some of our users have seen a dramatically greater loss of intelligence than that. At least 423 HubSpot customers have experienced more than 20% of their organic search traffic getting stuck in this #SSLpocolypse black hole
http://blog.hubspot.com/blog/tabid/6307/bid/28890/Websites-Get-Traffic-From-16-Fewer-Keywords-After-Google-s-SSL-Change-New-Data.aspx
The average HubSpot customer is now receiving traffic on 16.19% fewer keywords than in the month before this change. The amount of traffic that they receive is similar in that time period, but many of the visits are now lumped into the “Not Provided” bucket.
Marketing Takeaway: Check your keyword traffic changes using HubSpot!
Milwaukee PSA Babies and Knives

http://www.dmnews.com/babies-shouldnt-sleep-with-knives–or-their-mothers-says-psa/article/216935/
Milwaukee has 10.4 infant deaths for every 1,000 live births, certain zip codes in that city have higher baby mortality rates than some undeveloped and Third World countries
The culprit? Often, unsafe sleeping arrangements, including substance-abusing and/or over-exhausted mothers ?co-sleeping? in the same bed with their babies, according to Milwaukee Mayor Tom Barrett.
Milwaukee Heath Department unveiled a duo of provocative ads last week
the PSAs feature babies sleeping right next to huge mean-looking knives — Tagline: ?Your baby sleeping with you can be just as dangerous.?
Co-sleeping… good or bad? Who is the audience? Etc.
Marketing Takeaway: Does shock value outweigh real value?
Heinz Fixes Flub to Catchup

http://www.clickz.com/clickz/news/2125588/heinz-facebook-flub-engagement-flurry
Heinz has increased its Facebook likes by 40,000 since telling the New York Times three weeks ago that it would exclusively sell a new product for a limited time on the social site. For social media marketers, it seemed like a brilliant play. But then a major hiccup ensued earlier this week.