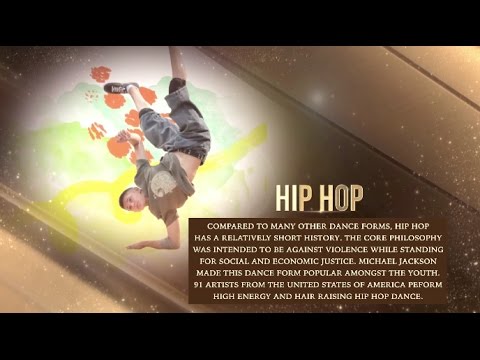 Compared to amny other dance forms, hip hop has a relatively short history. The core philosophy was intended to be against violence while standing for social and economic justice. Michael Jackson made this dance form popular amongst the youth. 91 artists from the U.S.A. performed this hip hop piece.

Glimpses from the World Culture Festival (WCF), a celebration of the Art of Living’s 35th anniversary, that was held in New Delhi, India between March 11-13, 2016.

Hosted on the world’s largest floating stage of 7 acres, WCF brought together 3.75 million people from 155 countries. The 3-day event was marked by mesmerizing performances by 36,603 artists from around the globe and showcased cultural diversity like never-seen-before. An estimated 1.8 billion people watched the live telecast of the event from 767,463 locations across 188 countries.