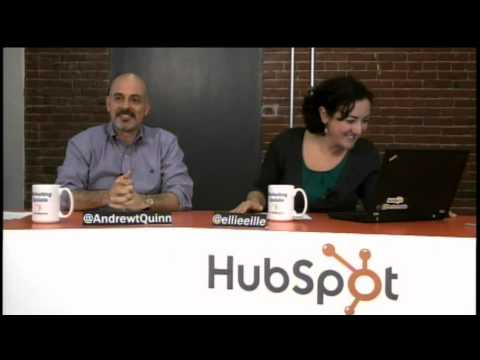 This week on the Marketing Update, Ellie Mirman and Andrew Quinn discuss your attractiveness based on Facebook comments, social media upending search engines, professional vs. personal use of social networking, Romney?s hidden camera footage going viral, and Google maps giving us an inside peek.

How to interact on Twitter: include #MktgUp in your tweet!
On the show today is Ellie Mirman (@ellieeille) and Andrew Quinn (@andrewtquinn)
As always, all the old episodes are in iTunes. If you like the show, please leave a 5-star review!
Anyone is welcome to come by the show to watch as part of the live studio audience – 4pm Friday
Headlines

Are you more attractive if you get more Facebook comments?

http://mashable.com/2012/09/16/facebook-study/
According to a University of Missouri study, the first think you look at on a new Facebook friendapos;s profile are the comments on their profile picture.
The comments your Facebook friends leave on your profile picture strongly affect how people perceive your physical, social and professional attractiveness.
This shouldn?t come as much of a surprise, as profile pictures are the first place your eye is drawn to based on eye scan studies.
Other people?s opinions matter more than your own self-presentation.
?If you?re concerned about forming a particular impression, being aware of the information generated by others about your is key in the goal of achieving a positive self-presentation.?
Marketing Takeaway: In social, other people?s opinions matter. They affect how your target audience perceives you. You need to pay close attention to the comments people make to understand the impression you are making.
Social media upending search engines

http://www.marketingpilgrim.com/2012/09/could-social-media-be-slowly-eroding-search-engine-traffic.html
Experian Hitwise UK published some search data that suggests social media is hitting overall search traffic
Overall search engine visits are down by 40 million since last year – the first time it?s ever gone down year-over-year
Search traffic especially went down from July 2012 to August 2012 – could it be the Olympics? People relying more on social media for up-to-date info?
Could it be that search results are better so visitors need fewer searches to find what they?re looking for?
Marketing Takeaway: SEO is not the be-all and end-all of online marketing. In fact, social media is becoming increasingly important and may start to creep into search engines? ownership of online awareness. Make sure you are covering your bases of inbound marketing channels instead of putting all your eggs in one basket.
Professional vs. personal use of social networking

http://blog.hubspot.com/blog/tabid/6307/bid/33604/New-Study-From-LinkedIn-Shows-How-User-Mindset-Affects-Social-Media-Marketing-INFOGRAPHIC.aspx
Internet users have different mindsets on different social media sites.
Th Mind Set Divide – detailed in an infographic from LinkedIn research – shows the emotional drivers that put users in a particular frame of mind depending on which type of social networking theyapos;re doing
Personal – casual mindset, socialize, stay in touch, be entertained, kill time
Professional – maintain professional identity, make useful contacts, search for opportunities, stay in touch
This has a big effect on marketers: think about what content do people EXPECT on that social network
Marketing Takeaway: Align your content with the right emotion by matching your message to the mindset. So while itapos;s definitely beneficial to understand the general mindsets and emotional drivers for usage of a particular social network, keep in mind that the specific mindsets of your own particular audience should be the ultimate foundation of your strategic social media marketing decisions on a given social network. Experiment with different types of updates, track your analytics, and let the data about what works and what doesnapos;t drive your social media marketing decision-making.
Romney?s hidden camera footage goes viral