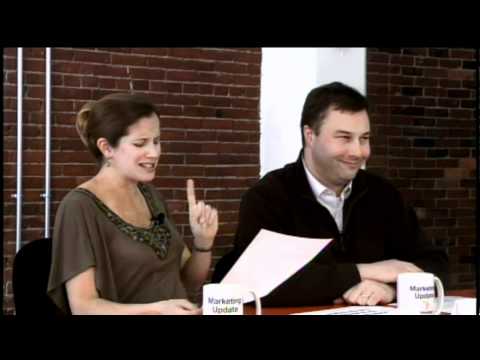 This week on the Marketing Update, Karen Rubin and Mike Volpe discuss baseball season kicking off socially, tampons on Pinterest, social media outsourcing on the rise, a pink slime branding catastrophe, and Mitt Romney getting funky (with behavioral targeting).

Episode #195 – April 6th, 2012
Intro
How to interact on Twtter: Include #MktgUp in your tweet!
On the show today is Karen Rubin (@KarenRubin) and Mike Volpe (@MVolpe)
As always, all the old episodes are in iTunes. If you like the show, please leave a 5-star review!
Anyone is welcome to come by the show to watch as part of the live studio audience – 4pm Friday
Headlines

http://www.rantsports.com/bringingheat/2012/04/06/mlb-makes-opening-day-2012-a-social-media-experience/
MLB sent out a variety of trivia questions on Twitter followed by the hashtag #MLB.TV. As followers tweeted the correct answers in response (thereby increasing MLB?s reach), they were given prizes, such as iPads and video game consoles. Over 57,000 responses, and MLB.TV trending for hours, both nationally and globally. The longer it remained a trending topic, the more prizes were given away, giving baseball fans more incentive to keep it going even longer.
Created Tumblr and Pinterest accounts for each team and for the league
How well did it really work? #nfl (8k/day) vs #mlb (6k/day) in last 30 days
Marketing takeaway:
Tampons on Pinterest

www.dmnews.com/kotexs-awesome-pinterest-campaign/article/234480/
Kotex did a clever campaign on Pinterest
Here’s how it worked: The company targeted 50 influential women and analyzed them based on their Pinterest boards ? shoes, bikes, photos, wedding dresses, crafts and all. Kotex made them a gift box based on their interests. To get the box, all the lucky ladies had to do was re-pin their gift. Kotex then mailed them the box, completing the buzz-worthy cycle.
Results: 2,284 interactions and 694,853 impressions
But Kotex board only has 44 pins?
Marketing takeaway: More Targeting can lead to more reach.
Social Media Outsourcing on the Rise

http://blog.hubspot.com/blog/tabid/6307/bid/32208/Social-Media-Outsourcing-Increases-128-in-Two-Years-New-Report.aspx
http://www.hubspot.com/state-of-the-social-media-marketing-industry-with-social-media-examiner/
http://www.scribd.com/embeds/86810995/content?start_page=1view_mode=listaccess_key=key-51p5l3rpluxexhpjc58secret_password=l6bwvawfbvvsfk137kf
State of Social Media report by Social Media Examiner
In 2010, only 14% of marketers outsourced social media marketing. In 2011, double to 28% and in 2012 rose to 32%
20% of the outsourcing is for design and development and only 7% for monitoring and 4% for community management
Marketing takeaway: Consider finding a trusted partner to help you with inbound marketing.
Pink Slime Branding Catastrophe

http://www.usatoday.com/news/opinion/editorials/story/2012-04-01/pink-slime-lean-beef/53933770/1
Beef additive made from LFTB (lean finely textured beef) gets renamed “pink slime” in the mainstream media and social media and the backlash causes many retailers to stop selling products containing LTFB
“A USDA scientist, inspecting for product safety, coined the name “pink slime” in an internal e-mail. For years, the epithet remained buried, until The New York Times mentioned it in a 2009 story critical of its maker, Beef Products Inc. Celebrity chef Jamie Oliverrailed against it, and recent stories by ABC News andTheHuffington Post, accelerated by social media, made it disgustingly famous. Repulsed consumers reacted.”
The NAME of something can have a huge effect on the perception of it
http://www.usatoday.com/news/opinion/editorials/story/2012-04-01/pink-slime-lean-beef/53933770/1
Marketing takeaway: Can you tag competitive brands as something negative and catchy?
Mitt Romney Gets Funky (with Behavioral Targeting)

http://www.businessinsider.com/mitt-romney-is-going-to-show-you-his-campaign-ads-no-matter-how-hard-you-try-to-avoid-them-2012-4
Romney’s advisors cite a survey that says 31 percent of likely voters had not watched broadcast television “live” during the previous week. And when they did watch television they were skipping the ads.
Step 1 – Define the persona: Surveyed thousands of online users about party affiliation, positions on key political issues and opinions about the president to find who was “potentially persuadeable” = 18 and older, Republican-leaning and strongly dissatisfied with the current administration
Step 2 – Find the persona: Using the Web histories of the people who fit that profile (an audience analytics company the campaign has hired, uses algorithms to find other computer users who might have similar political sentiments based on their browsing). Looking at what these people do online ? what they read, where they leave comments and what cont